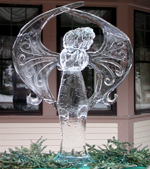 January brings out a variation on White Mountain artists ~ our brave sculptors of ice and snow! The Wentworth, here in Jackson, will host the 18th annual Great Ice Carvers of New England Invitational Ice Carving Competition on Monday, January, 7, 2013. The challenge begins at 10:00 am, and competitors have until 1:00 pm to create works of art from 300 pound blocks of ice. Chisels, picks, even chain saws make the ice chips fly, and blow torches smooth edges to create animals, birds, mythological figures and other flights of fantasy.

Pictured are some of the 2012 creations, which, like Frosty the Snowman, vanished with the first thaw. New this year is a People’s Choice Award, so plan to stop by the Wentworth to see the ice sculptures beginning next week. They will be on display on the porch (with special lighting at night) as long as arctic temperatures allow.

Competitors in the New Hampshire Snow Sculpture event will have longer for their competition later this month – from Friday, January 25 until noon Sunday, January 27, 2013. We’ll post more about this upcoming competition soon.