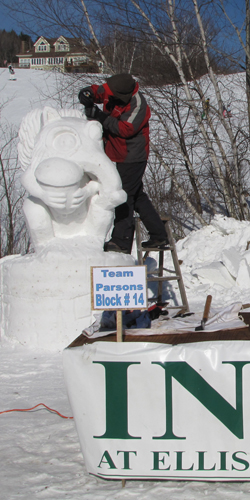 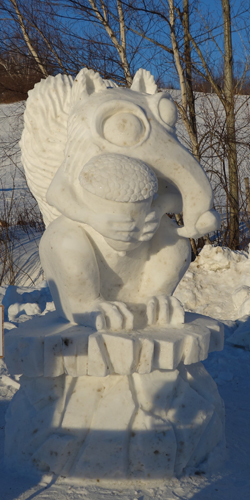 Jackson hosted the New Hampshire Snow Sculpting Competition January 25-27, 2013, and we are proud to announce that the winner of the People’s Choice and Invitational Awards stayed with us during the competition. Wade Parsons of Massachusetts won People’s Choice and tied for First Place in the Invitational Competition with his sculpture of Ice Age’s “Scrat”. You can see him working in the photo on the left, and the finished sculpture on the right. The other entry tied for First Place was “Hang in There Kitty” by Audrey Meyer and Scott Lewis of Maine (far left photo in the collage). The team who won the New Hampshire Sanctioned Event, with the honor of representing the state at the 2014 National Competition at Lake Geneva, WI, is Sandy Hall, Kathy Fraize, and Eric Marnich with their angelic entry (far right in the collage).The sculptures are judged on creativity, technique and overall message, and are viewed by 2500 visitors to the White Mountains each winter. For video and images of the sculptures being created this year, you can visit WMTV.com