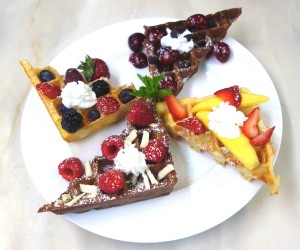 Lets celebrate National Waffle Day (August 24) all month ~ this special breakfast treat deserves it. Why August 24? The date marks Cornelius Swarthouts patenting of the waffle iron on that day in 1689. (As a bonus, International Waffle Day, which originated in Sweden, is March 25, so plan to celebrate again when winter winds blow).

Cooking flat cakes between two pans can be traced back the Greece, while waffles first came to New England with the Pilgrims who discovered them during their stay in Holland before reaching the shores of Massachusetts. The Inn at Ellis River often features Belgian Waffles as the sweet entree at breakfast, but sometimes we’ll surprise you with a savory option. Creating flavored waffles is easy ~ just add cinnamon, citrus rind, citrus oil such as lemon or orange, or natural extracts such as maple, banana, or almond for easy waffle variations. Chocolate lovers? Just add a tablespoon of unsweetened cocoa to each cup of prepared waffle batter. Substituting melted brown butter for the regular melted butter in your recipe for waffle batter also is an easy variation,

Savory options can be Cheddar waffles with a bacon, and melted Cheddar garnish, or perhaps the traditional combination of chicken and waffles made with a cornmeal waffle. Among our ideas for sweet waffles this month are: 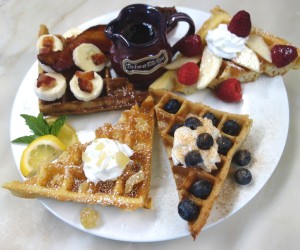 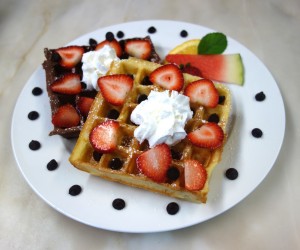 …and the list goes on, so check our Facebook or Google+ pages for postings of our favorites!