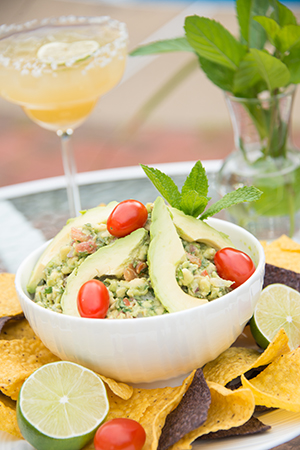 Lazy days of August are a perfect time to enjoy guacamole, whether by the pool or next to a waterfall. At the Inn at Ellis River, our version is especially refreshing because it adds both mint and cilantro to the avocados, onion, tomato, lime, chili peppers, and seasonings. Our guacamole certainly has migrated a long way from its origins among the Aztecs to the White Mountains of New Hampshire. The main ingredient, avocados, can be traced back over 7,000 years in their native south-central Mexico, although the Hass variety most often used today dates only from the 1930s in California. Something to remember ~ among the Aztecs, avocados were believed to be an aphrodisiac!

Southwestern style entrees at the Inn often feature guacamole as a garnish, although at home guacamole is most often accompanied by tortilla chips, and at the right time of day, a frosty margarita. Why not try our Herbed Guacamole at home while you plan your next getaway to Jackson? We’re waiting to welcome you (and Frank makes a great margarita)!