The widely celebrated Valentine’s Day was named Saint Valentine. It is not clear who exactly Saint Valentine was because the Catholic Church recognized at least 3 saints with the name Valentine (or Valentinus). One legend behind Saint Valentine was that he was a priest during third century Rome. Emperor Claudius II outlawed marriage for young men at the time because he believed single men were better soldiers. Valentine disagreed and proceeded to carry out marriage ceremonies in secret for young couples in love – he was eventually sentenced to death as a result. There are other rumors as to why Valentine was put to death such as he attempted to help Christians escape Roman prisons because they were being tortured. Legend has it that Valentine sent the first “Valentine” message to a young girl he fell in love with during his confinement in prison. Though it is unclear who Valentine really was and what was the real story, the various stories point to him being a heroic person who was a sympathetic, romantic figure. By the Middle Ages Saint Valentine became one of the most popular saints in parts of Europe, namely France and England. 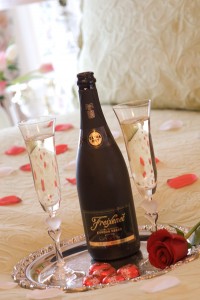 such belief is that it was to honor Valentine’s death and another belief is that the Catholic Church wanted to ““Christianize” the Pagan celebration of Lupercalia”. Lupercalia was a festival in celebration of fertility and occurred from February 13th to the 15th in ancient Roman times to avert evil spirits in order to release fertility. Lupercalia was eventually outlawed at the end of the 5th century when Pope Gelasius declared February 14th to be Valentine’s Day. At some point not much later this day became associated with love and is recognized by many as a day of love. Over time, it became customary for friends and lovers to exchange small tokens of affection hence what is known as “Valentine’s Day Greetings”. It’s thought that Americans began exchanging hand-made Valentine’s in the early 1700’s. According to the Greeting Card Association, approximately 1 billion Valentine’s cards are sent every year – which is second to Christmas card greetings.

Come stay with us anytime through March to enjoy a romantic getaway with your special someone to celebrate Valentine’s Day – anytime!