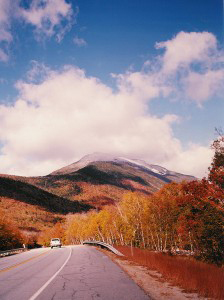 With the great variation in elevations and different species of trees, foliage lasts for several weeks in late September and early October in the White Mountains. Areas in the northern Presidential range and along the Kancamagus Highway often peak in late September and early October. A beautiful drive that highlights the Saco River valley in Western Maine, Mount Washington, and some of the Presidential Range is a loop north through Evans Notch and then south past the Eastern slopes of the White Mountains.

From the Inn at Ellis River, drive south on Route 16 to Hurricane Mountain Road, just north of the Scenic Vista in North Conway. Turn left and follow the winding road over the mountain, surrounded by foliage color. If you have time for a hike, you might want to try Black Cap. The trail head is about 3.7 miles along Hurricane Mountain Road. Allow about two hours for the 2 ½ mile trek with views over the Saco River valley.

A Farm Stand Detour to Fryeburg, ME: Hurricane Mountain Road will dead end at an intersection with Green Hill Road. If you wish to detour to a local farm stand, turn right (south) on Green Hill Road until it intersects with Route 113 in Fryeburg. Turn right and then after a short distance, left on River Street and cross the Saco River to Weston’s Farm on your right. The Weston’s Farm is a seven generation family farm that has practiced sustainable agriculture for over two centuries. You’ll find bountiful fall produce and pumpkins. If you have made this detour, retrace your route to Route 113 and turn right. Follow Route 113 north through Stow and then Evans Notch.

Fryeburg Fair: If you are visiting during the first week of October, you can add the Fryeburg Fair to your itinerary. Step back in time and enjoy this old-fashioned “Blue Ribbon”country classic. Dates for the 2012 Fair are September 30 – October 7.

If you are not in the mood for a farm stand detour: when you reach the intersection of Hurricane Mountain Road and Green Hill Road, turn left on Green Hill Road and follow it about 2 miles, where it will turn left again at South Chatham. After about 2 miles, turn right on Stow Road. Follow Stow Road until you reach a T intersection with Route 113 and turn left again. Follow Route 113 north to Stow and then up through Evans Notch.

Evan’s Notch: You will pass through the valley of the lower Saco River, with scenic countryside that echos times past at every turn. From the valley, the road becomes narrow and wooded through Evans Notch , twisting past rounded peaks that contrast with the more rugged topography of the Presidential Range. North Baldface peak at 3610’ tops this range. This less accessible notch is closed in winter, and is less known to tourists than the main White Mountain highways. Most of Evans Notch actually lies in Maine and includes the newest wilderness area of the White Mountain National Forest designated in 1991.

The Androscoggin River: After you pass through the Notch, Route 113 ends in a T intersection at Route 2. Turn west and soon you will leave Maine as you follow the course of the Androscoggin River, which was once a “highway” for logs from the logging camps in Great North Woods of New Hampshire. Near Shelburne, NH, you will see a beautiful stand of white birches. Soon you will reach Gorham, where you will turn south on Route 16. This town has been catering to tourists since 1851 when the Atlantic and St. Lawrence Railroad (now the Canadian National) started bringing summer tourists to the White Mountains as evidenced by the train on display in the park.

Mount Washington: As you head south from Gorham, the road follows the course of Peabody River, which flows from the north side of Mount Washington. The majesty of the highest mountain in the Northeast takes on a different dimension as you approach it from the north. Soon you will reach the Mt. Washington Auto Road and Great Glen Trails. If you haven’t yet gone to the top of the mountain, this is your chance to visit the Observatory. You can drive yourself or take the Auto Road’s guided tour. South of the Auto Road you will see the Wildcat Ski Area. Weekends during the foliage season their Gondola offers you a stunning look at the ravines and fall colors of Mount Washington.

Eastern Slopes of the Presidentials: Then , continuing south, take time to learn about the environs at the northern headquarters of the Appalachian Mountain Club as well as the history of this organization which maintains a string of the huts in high places accessible only on foot. A moderate 30 minute hike to the Crystal Cascades give you a taste of the trails, or if you prefer a shorter hike, travel a bit farther south to the trailhead for Glen Ellis Falls on your right (be sure to take the trail that goes under the road to reach the waterfall). As you continue south, you will pass through Pinkham Notch, and the valley through which the Ellis River flows will open before you. Follow its course back to Jackson and the Inn at Ellis River!